How To Install Battlefield 4 – And Fix msvcp140.dll Error 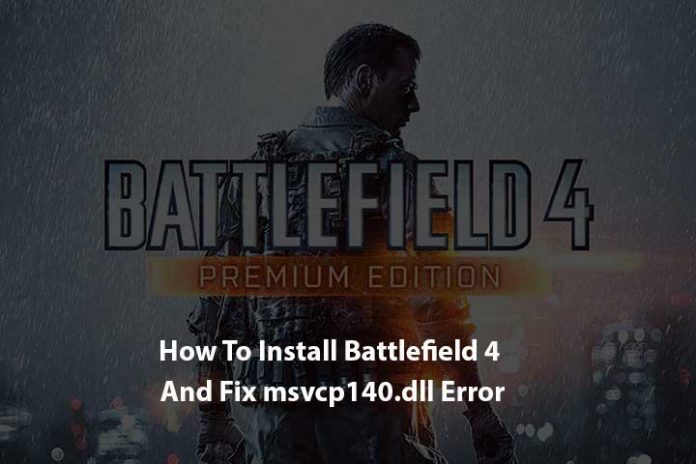 Video games have now developed into a fully equipped and functional culture. It has grown up with technology and now there are entire groups of people supporting the industry for its benefits. Though it doesn’t include the majority of the population, its culture is followed by fairly large groups and customers for recreation and leisure. As this population increases, the number of installations and tech support also increases. One such popular game at the moment is Battlefield 4. This article seeks to educate the readers on the installation of Battlefield 4 and the importance of msvcp140.dll download for this game. Granted that the gaming community already has the tech support it requires, but this article is aimed at the maiden experience of people in the community. Hopefully, by the end of this article, the readers will be able to install the game and solve the errors related to it.

Battlefield 4 is the 4th entry in the Battlefield game series, developed by DICE video game developers and published by Electronic Arts. It is a first-person shooter video game and it can be played in both single-player and multiplayer gameplay. First released on Windows, Xbox 360, and PlayStation 3 in October of 2013, then updated later in November on PlayStation 4 and Xbox one, it takes place in a fictional “war of 2020”. It was met with huge success for its gameplay and it sold 7 million copies worldwide. It comes with several downloaded updates for newer modes or places, allowing the players to switch through various styles and missions. The end premium option gives access to all with personalisation options.

How to Install Battlefield 4?

There are two ways to install Battlefield 4, a digital and a physical disc. One might want to decide which way they want to choose. Origin is the publishing site for Electronic Arts, so that is a must.

For a Digital Copy:

For a Physical Disc Copy:

Note: If it shows that the code has already been used, one may likely have that code in use for their other account. The code can be shifted then through contact. The second fault may be that the person has bought a second-hand game, in which case the code will be null.

Why is the msvcp140.dll Important for Battlefield 4?

msvcp140.dll is supposed to be one of the core files of the Windows Operating System. The set of driver functions and procedures that it has applies to various processes installed by Windows. Mscvp140.dll is a C++ visualising program owned and designed by Microsoft to be installed individually of any application. The common errors like “msvcp140.dll is missing” or “msvcp140.dll not found” are likely because of corrupted software and registry issues. A simple